Reblogged from the Liberty Blog

The powers of Congress are limited by the US Constitution, not the Endangered Species Act. ~Andrew Wyatt

An animal rights group has filed a lawsuit arguing that the Endangered Species Act — which is itself constitutionally suspect — limits Congress’ powers, i.e. Congress cannot legislate on endangered species issues unless that legislation would be consistent with the ESA. This absurd proposition has already been rejected by that bastion of anti-environmentalism: the Ninth Circuit, which recently characterized the protection of endangered species as the “highest priority” under federal law.

The subject of the most recent controversy is a permit exemption for exotic hunting ranches, which finance populations of species that are endangered or extinct in the wild through regulated hunting. This fantastically successful model for species conservation has been consistently attacked by animal rights groups. A few years ago, 60 Minutes produced a piece on this success and interviewed those on both sides of the political and legal fight. Lest you have any doubt that the opposition isn’t about species conservation, the leader of the animal rights group is asked directly whether she would rather see these species go extinct than be saved in this way.

And she said yes!

“Jamaica to cave in to Chinese on deal that would seal the fate of one of the country’s most pristine areas, and home to the endangered Jamaican Iguana.” ~Andrew Wyatt

Tourism has long been the leading economic sector in Jamaica, bringing in half of all foreign revenue and supporting a quarter of all jobs. Yet government officials now risk jeopardizing that lucrative business, and Jamaica’s reputation in the international community, with a secretive deal to let a Chinese company build a mega-freighter seaport in the nation’s largest natural protected area.

The planned port would occupy the Goat Islands, in the heart of the Portland Bight Protected Area, which only last year the same government officials were petitioning UNESCO to designate a Global Biosphere Reserve. Instead, the lure of a $1.5 billion investment and a rumored 10,000 jobs has resulted in the deal with China Harbour Engineering Company, part of a conglomerate blacklisted by the World Bank under its Fraud and Corruption Sanctioning Policy.

Many details of the proposed project remain unknown, and the government has rebuffed repeated requests for information…

The Safari Club International steps up to protect conservation through captive breeding of the ‘Three Amigos’ antelope! ~Andrew Wyatt 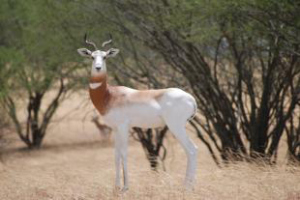 Safari Club International has been granted intervenor status in federal district court to defend Section 127 of the Consolidated Appropriations Act of 2014 .  The new provision, signed into law on January 18, 2014, exempts the taking of members of U.S. herds of the scimitar-horned oryx, dama gazelle and addax from most permit requirements associated with their endangered species status.  Section 127 directed the U.S. Fish and Wildlife Service (FWS) to reissue a 2005 rule that excuses private ranchers from obtaining permits to cull and to sell culling opportunities for members of their three antelope herds.  Even before the FWS reissued the 2005 rule, Friends of Animals filed a lawsuit to challenge the constitutionality of Section 127.  Their lawsuit claims that, by passing the legislation, Congress illegally interfered with the authority of the judiciary which constitutes a violation of the constitutional separation of powers doctrine.   This is not the first…