With conservation groups attending an illegal wildlife trafficking symposium in London this week, and the US announcing  its National Strategy on Wildlife Trafficking here at home, animal rights activists are using the opportunity to blur the lines between legal and illegal wildlife trade. Nevertheless, whether it is creating economic value for species preservation within local African communities, incenting captive breeding as a conservation safety net, or raising money for anti-poaching efforts, private commercial activity is an economic engine driving significant contributions toward the conservation of some of Africa’s most charismatic megafauna. Poachers for rhino horns, ivory and asian medicine markets are the true enemies, not legal hunting activities and captive breeding programs. 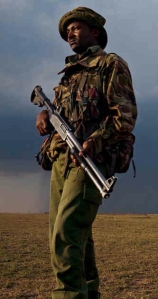 Africa is proving to be a more and more difficult arena in which to affect real conservation.  No longer is the enemy simply corruption for personal enrichment. Recently, the Washington Post reported on the links between the astronomical amounts of money generated in the black market for rhino horn and elephant ivory, to funding for  al-Qaeda and other terrorist groups. With Vietnamese demand for rhino horn fetching $50,000- 100,000 per kilo, the level of violence perpetrated on black rhinos and the rangers responsible for protecting this “Critically Endangered” species, is almost unfathomable.

A similarly depraved dynamic drives the relentless slaughter of African elephants for their ivory. These huge ill-begotten profits are coveted by terrorists and sophisticated crime syndicates to fund operations. Numbers of elephants and rhinos poached have spiked exponentially over the last decade. Needless to say, the authorities in African nations are outgunned, ill-equipped and underfunded. In an effort to help fund efforts to protect rhinos the Dallas Safari Club raised $350,000 to fight poaching in Namibia with a conservation fundraising auction last month. Poaching, not controlled hunting, threatens the future of elephants and rhinos in Africa.

On another front, according to Duke University Professor Stuart Pimm, there are approximately 35,000 free ranging lions left on the African continent today. Although at a recent African lion workshop hosted by US Fish & Wildlife Service (FWS), three experts agreed that the lion is not currently in danger of extinction, US based animal rights organizations petitioned FWS to list lions as “Endangered” under the Endangered Species Act (ESA), citing hunting as a significant factor in lion decline. However, most conservation experts agree, habitat loss and human-lion conflict, not hunting, are the primary causes of the lions’ decline in Africa. To the contrary, hunting advocates have been the biggest barrier between the African lion and decimation by creating economic incentives for local communities to protect lions as a valuable and sustainable resource.

Meanwhile, back in the United States, Texas game ranchers are raising endangered African hoof stock in large numbers. A few years ago the Humane Society of the United States (HSUS) filed a lawsuit beginning a prolonged legal battle to block permitting by FWS of ranchers who have brought three endangered antelope species (the Scimitar-Horned Oryx, Dama Gazelle and Addax) back from the brink of extiction. The argument that these antelope are better off extinct than thriving on Texas game ranches was undercutting the economic value of the endangered gazelles and threatened to destroy all the good work these dedicated conservationists had done. Fortunately, legislation known as the “Three Amigos” bill, reinstated an exemption for captive bred specimens protected under the ESA, again allowing for  the propagation and trade of these three species, was passed on January 21, 2014– clearing the way for commercial interests to protect these magnificent animals from extinction.

The thrust of anti-hunting rhetoric has been to equate hunting to poaching and characterizing any economic activity involving animals as inherently immoral or unethical. These groups demonize hunting and hunters, and try to mold public opinion to be empathic to anti-hunting ideology by emphasizing the death of individual animals in dramatic fashion — hoping to trigger protective feelings from an animal loving public that relates to their own pets. They refuse to acknowledge the economic contributions made by commercial interests in wildlife and seek to characterize the economic value of animals to be exploitative and immoral.

“In a civilized and cultivated country, wild animals only continue to exist at all when conserved by the sportsman. The excellent people who protest against all hunting, and consider sportsmen as enemies of wildlife, are wholly ignorant of the fact that in reality the genuine sportsman is by all odds the most important factor in keeping wild creatures from total extermination.” ~ Teddy Roosevelt

The truth is, if they have no economic value, these animals are far more difficult to conserve. This fact is reinforced every day on the ground in Africa when a villager sees more value in protecting his livestock by poisoning a lion than he does in letting the lion live. Economic incentives are a vital component of 21st century wildlife conservation. Just as the illegal value of wildlife trafficking is driving many animals towards extinction, continuing to develop a legal economic value and trade for these same animals may be their only salvation. Private commercial conservation efforts are an intrinsic part any sincere effort at species preservation.

2 thoughts on “Lions and Rhinos and Gazelles… Oh My!”